Mitsubishi has got the first quarter test project results back from its electric vehicle trial which sees 25 of its i-MiEVs on test throughout the west midlands. 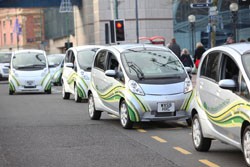 The report found that the average daily mileage was 23 miles, within the i-Miev’s maximum range of 80 miles. The majority of journeys were under 5 miles. Drivers used the full speed range of the car driving at motorway speeds when required.

The vehicles were parked 97% of the time, typically overnight and during school or work hours allowing for lengthy charging periods.

Mitsubishi said the vehicles were left plugged in for more than 20% of the time, occasionally for several days at a time.

Andrew Everett, lead technologist in low carbon vehicles for the organisation overseeing and funding the project, the Technology Strategy Board, said: “It’s great to see data starting to come out of the demonstrator trials and the findings from the CABLED project are very positive.

“Seven other consortia will be collecting the same sort of data from onboard computers in around 340 test vehicles. It’s all going to be collated and published by the Technology Strategy Board in an act of open innovation.

“The information will be available to all and the aim is that the findings help drive innovation and development in Low Carbon Vehicles Technology as well as to inform future UK activities related to Ultra Low Carbon vehicles.”

Lance Bradley, Mitsubishi Motors’ managing director, said: “It is interesting that the British motorists involved in this trial don’t seem to be showing any significant signs of ‘range anxiety’ and are using their cars just as they would a normal vehicle.”

Drivers selected for the trials of the Mitsubishi i-MiEV and the 85 other consortium vehicles were chosen through an application process led by Coventry University. Five other manufacturers within CABLED will roll out vehicles in 2010, including Mercedes Benz/Smart, Tata, Jaguar/Land Rover, LTI and Microcab industries.