Mini has refreshed its range of models with subtle style updates and a new sub-100g/km CO2 model. 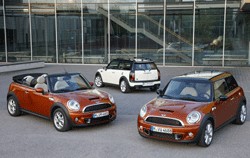 Following the March introduction of new, more efficient petrol engines for the Mini range, two all new diesel engines make their debut in the revised and refreshed range.

The 1.6-litre four cylinder engines are based on diesel units by the BMW Group. Both the Mini One D and Mini Cooper D achieve the same fuel consumption of 74.3 mpg and CO2 emissions of 99 g/km.

The Mini Cooper Convertible will also now be available with a diesel engine for the first time when it goes on sale in the UK in August.

Adjusted prices for the new range are due to be announced in a few days.

All existing Mini models feature a new bumper with a lower air intake, new style fog lamps, new headlights, new tail and brake lights are now LEDs while the brake lights use dynamic intensity lighting that varies according to the deceleration force applied.

Integrated reversing and rear fog lamps are also new and are housed in the rear bumper.

The centre console, steering wheel, air conditioning and audio controls have all been modified. Interior updates also include the option of six new upholstery and three fascia options.

All radio systems in the refreshed Mini range are equipped with a CD player and AUX-in connection that supports MP3 players and features DAB radio standard across the range with the exception of the Mini First model.

Mini Connected (optional) now offers owners of an Apple iPhone a range of functionality including web radio, , Google Local Search and Google Send to Car. The system can also receive RSS news feeds (such as Reuters, BBC, Channel 4, Yahoo , Google). Users can call up Facebook and Twitter messages or play videos on the central display as well as send standard text messages. With the voice control option messages can be readout on a text-to-speech function.