Mazda has released details of its next generation Mazda5 MPV, which is due to be launched this autumn. 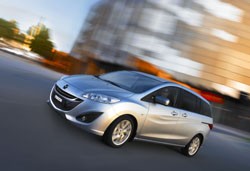 The new vehicle continues to use the Karakuri 6+1 seating system of the current model, which incorporates a fold-out centre seat in the second row and two individual folding seats in the third row.

It also retains the sliding rear doors (electric on higher specification models) but bears the new Mazda family face and Nagare design philosophy for a sculptured, sporting look and sense of motion.

Improvements over the old model include a 10% reduction in wind noise due to greater insulation, wider seat backs for more comfort, parking sensors, optional cruise control, Bluetooth and touch-screen sat-nav.

It will be offered with either a 2.0-litre petrol with a stop-start system that offers 13% better economy and 15% lower emissions than the outgoing 2.0-litre petrol, or the 1.8-litre petrol of the current model with six-speed manual transmission.

A 2.2-litre diesel engine is also likely to be in the range.