Ford’s new Mondeo will go on sale in UK showrooms in October and features a restyled exterior, updated interior and new engine choices. 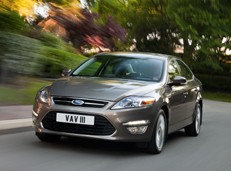 The new model will be debuted at the Moscow Motor Show on August 25 and features Ford’s latest kinetic design update, much like the new S-Max and Galaxy.

The interior features a new centre console design, revised doors and a new central overhead console with ambient lighting. Customers will be able to specify new trims levels across the range.

The launch of the new Mondeo will see the first application of a higher performance 238bhp version of the 2.0-litre Ford EcoBoost turbocharged petrol engine. This will be complemented by the existing 201bhp version of this engine launched in the Mondeo, new S-Max and new Galaxy earlier this year.

While the new 238bhp engine provides extra performance, average CO2 emissions are targeted to be 179g/km, the same as the 201bhp unit, regardless of bodystyle.

Another first for the new Mondeo is the introduction of the revised 2.2-litre Ford Duratorq TDCi engine, which boasts a 12% power increase to 198bhp, making it the most powerful Duratorq diesel engine to date. The Mondeo TDCi line-up sees this new engine joined by an improved 2.0-litre DuratorqTDCi diesel that has already been introduced to the Mondeo range earlier this year.

The new Mondeo range will include new driver assistance features that will appeal to fleet customers, many of which are appearing for the first time in a Ford model, including lane departure warning, driver alert and auto high beam.