Ghost will help Rolls-Royce to sell more cars in 2010

For years, Rolls-Royce was the company that was both the curse and the shining light for the Vickers Group – a confused conglomerate that went all the way from making battle tanks to printing presses.

But the strain of keeping Rolls and sister brand Bentley up to date became too much and the businesses were split in extraordinary circumstance with Bentley going into the growing brand portfolio being generated by VW and Rolls went to BMW.

BMW has been a sympathetic owner.

Rolls’ location at Goodwood, in a corner of the great estate, has become a destination.

The low-rise factory building has a facade that is more like an upmarket boutique hotel.

Inside there is little noise and grime.

This is clean-room assembly. Cars move slowly along a factory floor in a delineated roadway while the staff on the line fetch, or have delivered to them, parts that have been sent from Germany or suppliers elsewhere in the world.

The process is neatly known as the “Foureyes” process.

This is quality control on the move. Instead of making a car and then getting it inspected, two people transact every operation.
The factory floor is more than an assembly line.

Among the packing cases and stillages are parking places and display areas.

The parking places are occupied by cars which have had everything done that the assembly line can do.

Then they sit and rest while special requests are fulfilled.

The technical guys accommodate as much as they can.

Once the feasibility and cost is assessed, if the buyer can stand the cost the answer is yes.

But despite the capacity of the average buyer to afford almost anything that it is possible to make, it’s not an endless process of approving special requests and charging extra.

There are limits to the extent of bad taste.

Rolls does not want the used car forecourts of the world littered with cars of such execrable appearance that they are impossible to sell.

The minimum price of a Rolls-Royce is £200,000 in the case of the newly-announced Ghost.

Expect no change from a quarter of a million if you want a larger, but older Phantom.

Ghost is a four-door only at introduction, but as soon as they tell you that there will be three new Ghost models in due course you have a pretty good chance of guessing what’s afoot.

It tells people that you have the wherewithal to buy big and maintain big and the space to garage something very big.

However, there are many people who have the spending power to acquire a Ghost, but find that the uniformly measured parking spaces in their New York mansion block will not accept it; or that it will not fit in the garage hewn from the rock below the sea-facing bijou villa in Monte Carlo.

You could summarise the scale of Rolls-Royce by saying the employees make a car each.

There are 800 employees at Goodwood and they knock out 1,000 cars between them.

Because it is a subsidiary of BMW, the finance guys at Goodwood are not keen to admit how well they do at making money.

However, Companies House comes to our assistance by storing the 2008 accounts (the latest filed) which they are obliged to do.

That document tells us that the total revenue was pretty much the list price of a car times the number sold.

In fact, the year was skewed. Demand was running very strongly until September and then recession hit.

This business is a delicate balancing act of charging enough to ensure that only a very slim layer of people at the top of the income strata can afford it.

There are two reasons to buy a nice car and the other reason is to tell people precisely how much richer you are than they are.

Rolls knows how many people there are in the world of that sort of clout.

They are called the Ultra High Net Worth Individuals and they have assets of at least $30 million.

Recessions do not help.

Though the Ultras can still afford the car, they are less keen to rub in the dirt the noses of those who cannot.

There is little less sensitive than driving a 10-reg Phantom into the factory yard to announce redundancies.

So Rolls therefore does depend on the economic health worldwide, but is confident with the Ghost newly extending its audience there should be 20% more cars built and sold this year.

What's special about the Ghost?

The control centre display is concealed behind a veneered panel until its services are called upon.

Satellite navigation, telephone, communication and entertainment functions are displayed and managed by a central rotary controller, flanked by quick-access buttons.

Comfort Entry unlocks the doors when the key fob is within 1.5 metres and the chromed handle is grasped.

Voice control allows you to select from the control systems menus.

Cameras can combine to give a fish-eye view at blind junctions or provide ground images with obstacle recognition and reverse path prediction when parking.

A night vision camera works with pedestrian recognition to detect objects up to 300 metres away.

Lane departure warning alerts the driver if the car starts to drift out of its lane. 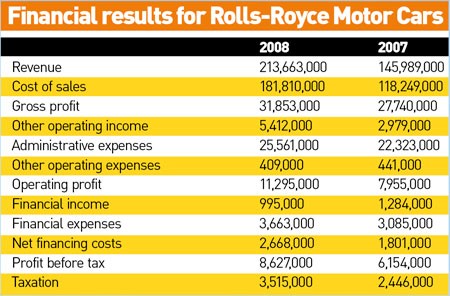