Peugeot reveals details of the new Peugeot 508 to be launched in 2011. 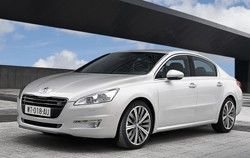 The Peugeot 508 is the marque’s new design look, which has evolved from the stylistic codes first unveiled on the SR1 Concept Car.

After launch, Peugeot’s HYbrid4 technology will become available on the 508 and will provide 200bhp performance with all-wheel drive and emissions of 99g/km of CO2 or zero in electric mode.

Utilising the PSA Group’s platform 3, the 508 will be produced in Rennes in France, for the European market and in 2011 in China, for the Chinese market.