Just as Mini prepares to launch its 4x4 Countryman, the brand has announced it will enter the World Rally Championship. 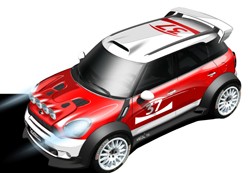 The carmaker has teamed up with Prodrive to build a Countryman rally car, based on the road car, which will compete from next year and showcase its latest launch in front of millions of global viewers.

“During the 1960s MINI captured the imagination of the world when the tiny car took on the might of V8 powered Fords and won what was then one of the toughest motorsport events, the 4000km Monte Carlo rally.

"I believe our new MINI will become a firm favourite of the latest generation of rally fans, just as it is adored by its millions of owners across the world," he added.