When we offer commentary on the fortunes of dealers in the used car retail sector the research behind it is a solid sample approaching almost 200.

But behind the headline figures there can be detail which offers even more useful insight into the market.

So this month we will examine that research from June (the most recent full data set) and focus on some of the key differences between franchise and non-franchise dealers.
There was a solid core of dealers for whom sales were little changed. And the proportion for whom business was clearly in decline is almost balanced by those reporting a better climate.

But a breakdown of the results between franchise and independent participants reveals that franchise dealers were finding the market considerably tougher than the overall figures might suggest. More than half were seeing a decline in month-on-month used car sales.
Contrast that with the independent dealers only where only 16% of the sample were reporting fewer used car sales.

This theme carries through in the results of all the questions in the survey. For example, when asked to compare their current month’s performance with a year ago 23% of the franchise sample reported they were selling fewer used cars compared to just 8% of independent dealers.

Perhaps the most telling figure is for expectations about the coming quarter. For the overall combined sample there is a definite sense of optimism.
But broken down it is clear that the independents were far more optimistic. Only 9% expected a decline in business, while 32% were fore-
casting stability.

Most tellingly, 20% were foreseeing an improvement in trading. Contrast this with the 50% of franchise dealers who expected deterioration over the following quarter and the 11% who foresaw an improvement.

What all this suggests is that business is tougher for franchise used car dealers in the current challenging market than it is for independents.

It seems that, for now at least, it is the independents who are better placed to weather the current difficult trading climate and their mood demonstrates it. 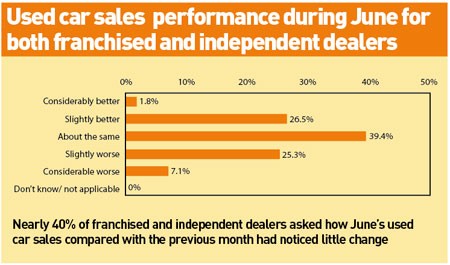