Fleet is the only game in town for manufacturers

2009 was the year of scrappage-induced retail sales. 2010 got the tail end of the scrappage incentive and will get a small end-of-year boost from retail buyers avoiding the VAT increase at the end of the year.

That means 2011 will be the year of fleet sales – or nothing.

By then the retail market will look a bit like a Strasbourg goose, having been force-fed pretty well continuously for around 18 months: it is unlikely to feel hungry again for quite some time.
That leaves the fleet market as the best candidate for additional sales.

Fortunately, the signs here are a little more encouraging. Paradoxically, that is because fleet sales have been so poor for the last two years.

Lots of corporate clients have leases coming to the end of their term and previous deferrals have left cars clocking up counter-productive penalty charges. Corporates also moved into short-term rentals to save cash last year, but that is not a long-term strategy as, again it soon becomes a false economy.

The downside is that all car manufacturers have done the same analysis and are desperate to get a piece of the fleet action.

Back in early 2009, fears of a complete meltdown meant that car companies closed factories for weeks or months at a time. That led to an unusual shortage of cars and, inevitably, smaller discounts for fleet buyers.

Now that factories are generally back to full-time working, discounts are back to pre-recession levels. Despite all the talk of cutbacks, virtually no actual production has been taken out of the industry – even Opel’s drastic restructuring plans has not yet led to plant closures, just announcements of plant closures.

The result has the inevitability of a car crash in the seconds before impact: discounts of 40% are not unknown today for big fleet buyers.

Not everyone is competing at the same level, but so far only Ford has made a point of standing back.
Ford has seen fleet share drop in the last two months after a conscious decision by both Ford of Britain and Ford of Europe. Having created a virtuous circle from 2006 – 2008 of smaller discounts and better residuals, it is desperate to avoid getting back on the hamster wheel of bigger discounts and falling residuals.

2011 will certainly test the resolve of all those car manufacturers that have spoken bravely of cutting discounts and building a more sustainable business. With the need for fleet sales higher than ever before, their prayer is likely to be, “Lord, help me stop discounting, but not yet.” 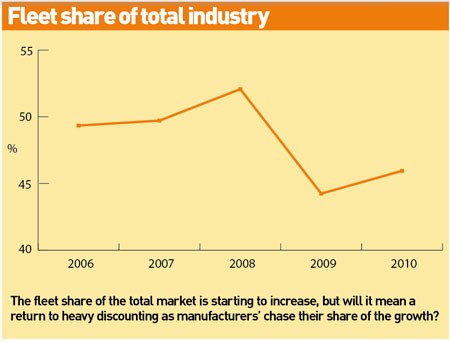 AM Poll
How has the COVID-19 pandemic affected your attitude or mental health? Please leave a comment
Vote
View all
143