The number of job vacancies in the motoring and automotive sector have dropped significantly.

According to the Reed Job Index vacancies dropped to 90 in July on the index, which is set against a baseline of 100 set in December last year.

Salaries offered were also down by around 10%. That contrasts with the general retail sector, which experienced a 10% jump in demand for new staff.

Overall, employer demand for new UK workers slipped back one point in July.

Manufacturing was among key sectors which bucked the trend, with demand for staff up 16% from March lows to reach a record Index high of Salaries for new jobs stayed steady to give a Reed Salary Index reading of 95 for the third month running.

While salaries remain 5% below the December 2009 Index base line figure, the underlying level is stable and just starting to trend upwards to give a national average salary for the Index of £31,909 in July compared to £31,879 in June.

Each month the Reed Job Index tracks the number of new job opportunities and salaries on offer compared to the previous month and against a baseline set in December last year.

The Reed Job Index is based on data from the UK’s largest job board, reed.co.uk, which every day lists over 90,000 job opportunities from 8,000 recruiters across 37 career sectors throughout the UK.

The manufacturing job index high of 116 is a particularly good sign for longer-term economic prospects, while the public sector Index record low of 63 is not surprising given this sector’s recently announced cutbacks.

Martin Warnes, managing director of Reed.co.uk, said: “Employers are still a little nervous about just how sustainable economic recovery will prove to be, according to the Reed Job Index’s downwards slip in July.

At the same time, however, some key job sectors bucked the trend, with demand for new staff in these areas rising to their highest level since the index began. 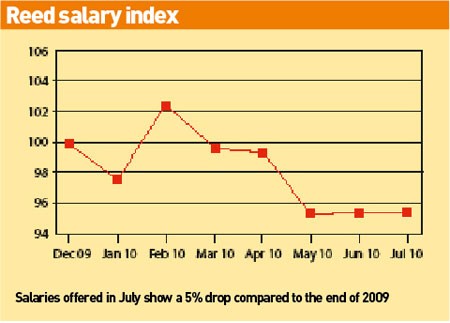