Vauxhall has revealed its new British-built Astra Sports Tourer which will go on sale in the UK at the end of October. 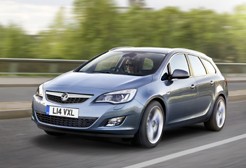 UK customers can order the new model now, which is the second model to join the new Astra range, which has now sold 28,000 units in the UK since its launch last December.

The Astra Sports Tourer maintains the hatch’s wheelbase (2,685mm), yet has allowed the maximum load length to be increased by 28mm to 1,835mm, and its load volume by 30 litres to 500 litres with the rear seats up.

The new model has Vauxhall’s FlexFold system (standard or optional depending on trim level) allowing each section of the 60:40 split-fold rear seatbacks to be lowered and housed in the walls of the cargo compartment. In addition, with the rear seat cushions folded up against the front seat-backs, the Sports Tourer has a flat load floor and a maximum load capacity of up to 1,550 litres.

The Astra Sports Tourer will make its world debut at the Paris Motor Show in October. Prices will be announced closer to launch.