Kia has revealed its new D-segment contender, the Optima, at the Paris Motor Show today. 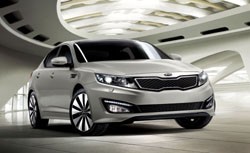 The Optima will go on sale in the UK in mid-to-late 2011 and Kia is hoping to it will help to significantly grow its market share in the D-segment.

As with all Kia models sold in Europe, the newcomer will be offered to consumers with the manufacturer’s seven-year / 100,000 mile warranty, which is fully transferable to subsequent owners.

The new model has already been launched in the Korean market, with monthly sales exceeding 10,000 units in June and July to claim the ‘best seller’ position for Kia for the very first time.

The Kia Optima’s specification will be tailored to European tastes, with buyers offered a choice of either petrol or diesel engines.

Kia’s market research indicates that demand for D-segment saloons in many countries will grow steadily over the next three years. It anticipates segment sales rising by 23% from 4.3 million last year to 5.3 million in 2013. While Kia expects the segment to shrink in Western Europe, it wants to gain a bigger share of the sector.

The Optima will be the first Kia to feature its smart parking assist which is included on the higher trim levels and automatically parks the car.