Kia has released the first official sketches of its new Rio and shows what the manufacturer calls its “next big step” in the company’s design evolution. 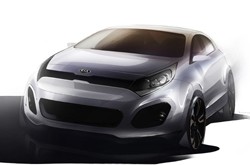 The current Rio is in desperate need of a design overhaul to bring it in line with the rest of Kia's line-up and this new version looks a lot more modern, with a lower and wider stance.

Kia is hoping the new model will help move along its strategy of not just being known for value, but for sporty and design led products too.

Soon-Nam Lee, Kia Motors Corporation director of overseas marketing, said: “Downsizing is becoming more and more of a trend these days and a B-segment car as attractive as the new Rio will no doubt help consumers to be more comfortable making that switch.”

The new Kia Rio will make its global debut at the Geneva Motor Show on March 1, 2011.

The current Kia Rio was the company’s third best-selling vehicle in overseas markets during 2010 with sales of more than 205,000 units.