Two wheel drive Jeeps on their way to UK

The new Jeep Patriot and Compass models will be available with both two and four wheel drive when they come to the UK later this year. 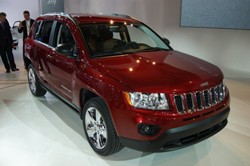 Along with diesel engines only the introduction of front wheel drive will make the American SUVs more environmentally friendly.

Jeep's president, Brit Mike Manley, who also heads up Chrysler's international operations, said two wheel versions of the vehicles have been available in the US for some time.

He added: "You also have to take a look at the success of other two wheel drive SUVs such as the Nissan Qashqai in the UK and Europe to see why we are doing this."

The Compass is a more luxurious version of the Patriot and so Jeep will have two models in the C SUV segment.

Manley said: "They will appeal to different customers in what is the largest SUV segment. The Compass has been outselling the Patriot in international market and we hope it will create more interest in the brand in the UK."

Also available with a diesel will be the new Chrysler 300 saloon when it comes to Britain.

"It's important to have diesel in the large car segment - around 95 per cent of sales of these models in Europe are diesel," Manley added.

He also believes the smaller Chrysler 200 would work in Europe, despite the fact that its predecessor, the Sebring, was withdrawn a year ago because of poor sales.

He added that the company was currently evaluating the situation.

"With the 200, 300, the Lancia Delta and Ypsilon which will all be badged as Chryslers, plus the Jeep models, we will have a full range for the first time."