The used car market this year will come under a range of influences, both positive and negative.

The economic picture will be one of pressure on consumer confidence. But there remains the factor of relatively low volume and ongoing long lead times for new vehicles and these are likely to mitigate against some of the downward pressure from other economic factors.

Long lead times bring upward pressure on late plate values. When nearly new car values are bolstered by additional demand from would-be new car buyers there is an inevitable strengthening effect down the age ranges. Against this is a range of economic factors working in the opposite direction.

The CAP Monitor view, however, is that – on balance – this year will see similar values at three years/ 60,000 miles as 2010 at worst and, at best, a slightly better performance than 2010.

In short, demand will be reduced due to pressure on spending. But this will be more than mitigated by supply constraints. And as we have seen over the past 18 months it is supply into the used car market that has the greatest influence on used car pricing.

For the early part of 2011 supply constraints will grow, which will create strengthening prices for the first half of the year.

It is believed that many people will attempt to mitigate the growing costs of buying and running a car by choosing more economical vehicles.

While there is nothing the consumer can do about the price of the car they purchase, or fuel and other running costs, their only choice is to opt for vehicles which offer the lowest possible cost burden over time.

Despite public spending cuts and rising unemployment, the demand for personal transport will remain undiminished. However, image will play less of a role in their choices as the hard reality of their personal economic circumstances comes increasingly into play.

There is some evidence that during economically difficult times there is a temptation among some consumers to effectively show how well they are able to weather the storm.

This ties in with the CAP view on high-end luxury and performance vehicles seeing a relatively neutral period in terms of values.

However, for many people there is some satisfaction to be gained from demonstrating how frugal they are and how successfully they can manage their expenditure. This plays well for more economical cars, in terms of image.

CAP has made the following economic inter-pretations of conditions this year, along with their possible impact on consumer confidence and spending choices, to arrive at the position illustrated in the chart.

Interest rates will begin to rise slightly, toward the end of the year.

This will impact on disposable income and thereby negatively affect consumer confidence and buying power.

This is likely to have an overall negative impact on the market overall and encourage consumers to choose more economical vehicles.

The Consumer Price Index and other cost of living factors will see an increase, also keeping the brakes on disposable income.

Again this will give economy the edge over image in terms of car choice.

VED will continue to put pressure on higher CO2 vehicles.

Other household costs, such as insurance, are seeing rises which again will impact on disposable income and potentially car type choice. 2011 will also see some significant tax increases which will inevitably leave many worse off, again encouraging different vehicle choices.

It should be noted that CAP does not share the view that rising unemployment has a naturally depressing impact on the used car market.

It is a fluid factor, as people move in and out of employment and changing circumstances do not remove the need for a reliable and economical vehicle.

How this overall picture will play out by sector will be determined partly by where values stand at present, against the general trend identified by CAP.

This can be expressed as whether sectors are ‘overheated’ or not. In terms of the relative performance of sectors, CAP believes that the factors outlined above will lead to some positive impact on city car, supermini and lower medium offerings.

Where the more significant downward pressure will be felt is in medium and large executive models, large MPVs, large 4x4s and sports performance models.

CAP does not believe there will be any significant changes in overall values for luxury cars or exotic sports and convertibles.

The chart offers an overview of the relative performance of sectors.

Average movements can be misleading and it should be borne in mind that in the case of large 4x4s, the majority of the reductions will come for those with the lowest image.

We are not forecasting the bottom falling out of the 4x4 market, but more of a fracturing which leads to a widening gap between premium offerings and the lower image vehicles. 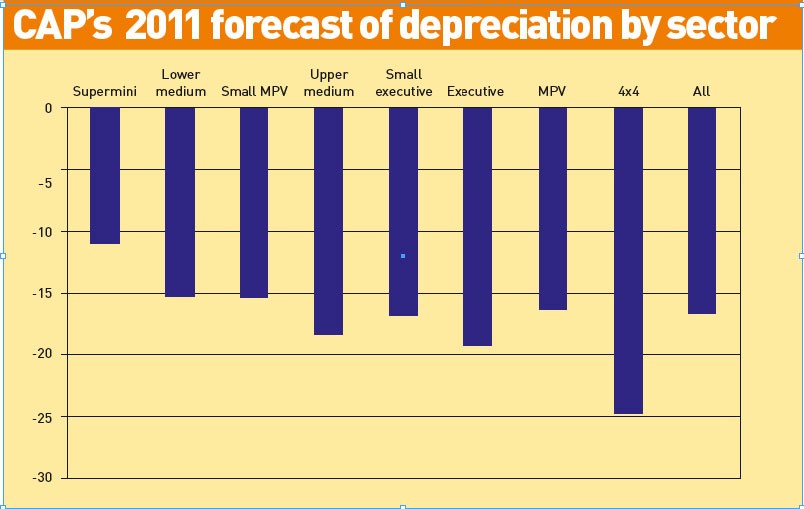