Next-generation Picanto on sale this spring

Kia’s next generation Picanto will feature a new line-up of engines when it goes on sale in the UK this spring. 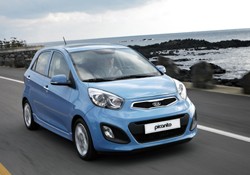 The A-segment hatchback will make its global debut at the Geneva Motor Show and the Korean manufacturer has confirmed it will come in three and five-door bodystyles for the first time. The three-door version will arrive in the autumn.

Picanto customers will have a choice of up to four new engines – three versions of the 1.0-litre, three-cylinder Kappa engine (petrol, flex fuel and bi-fuel) and a single 1.2-litre four-cylinder petrol Kappa power unit. The exact choice will depend on individual markets.

Exhaust emissions have been reduced, so that regular models in the new Picanto line-up will have a CO2 rating of between 95 to 105 g/km. The bi-fuel 1.0-litre engine will generate 80bhp and 94 Nm of torque.

In the UK, some models will be available with Kia’s ISG (intelligent stop and go) technology, cutting emissions to between 90 and 100 g/km and further improve fuel economy.

The engines will be mated to a choice of five-speed manual or four-speed automatic transmissions, depending on model.

Pricing for the UK and European markets will not be announced until closer to the launch date.