Nissan turns Sunderland factory into a classroom for youth initiative 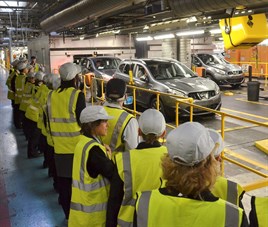 Nissan has opened its doors to its Sunderland factory to give schoolchildren an insight into the world of automotive manufacturing.

The UK’s biggest car producer is staging events at its plant in Sunderland and at its European Technical Centre in Cranfield as part of the Government’s ‘See Inside Manufacturing’ initiative.

Business Secretary Vince Cable said: “For too many young people the word manufacturing is a turn off.

“A worrying poll recently found that only one out of ten children aged 11 to 14 thought that engineering was an important job and even ranked being a politician as a better choice of career!

"We are determined to shake up old fashioned views of manufacturing. Through the Government's See Inside Manufacturing campaign and Nissan’s events at Sunderland and Cranfield, we are giving young people the chance to see the exciting face of modern manufacturing which is highly skilled, high tech and highly paid.”

Over two weeks at Nissan Sunderland Plant, 2,500 11-13-year-old students are taking part in the fourth Nissan Schools’ Engineering Discovery Event, where they learn about modern car manufacturing, watch the Qashqai, Juke and Note being made on the production line, take part in educational games, and find out how engineers have supported and improved the manufacturing process at the plant over its rich 25- year history.

The event, which started on October 10, is targeted at children before they choose their GCSE subjects. It also includes a section on future production at the company’s new lithium-ion battery plant, and the 100% electric Nissan Leaf.

Staff at Nissan’s European Technical Centre (NTCE) in Cranfield, Bedfordshire held a further ‘See Inside Manufacturing’ event last week, where pupils from the surrounding area came to learn about design engineering and development. The children also met recent recruits who shared their experiences about becoming engineers.