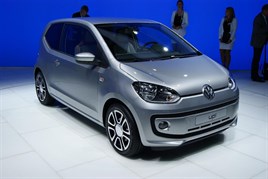 Volkswagen plans to launch critical new models into the city car, lower medium and upper-medium segments which will show new design flair and will bring new business to the brand.

However it will not build another coupe-convertible once production of the current Eos comes to an end, as the German carmaker expects the newly launched Golf Cabriolet to cater for these customers, said its head of marketing communications, Giovanni Perosino.

In the city car market, it will reveal a five-door version of its new Up at the Geneva Motor Show, followed by a sportier GT model later that year, and an electric version in 2013.

The three-door Up hits UK showrooms in February, followed two months later by the new Beetle.

He also revealed that the replacement for the Passat CC, to be revealed at the Los Angeles Motor Show next month, will be badged simply as the CC, to distance itself from Passat's association as a business car and to establish itself as a stronger retail proposition.