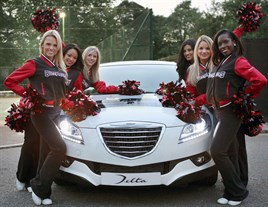 Chrysler UK has signed a sponsorship deal with the National Football League in the UK which will see it become the Official Car Sponsor of the NFL.

Chrysler will receive a comprehensive rights package relating to the NFL’s assets and key events, including the 2011 NFL International Series and the Super Bowl.

The new agreement also includes exclusive broadcast sponsorship of Sky Sports’ live NFL coverage throughout the remainder of the 2011 season.

Chrysler displayed a NFL/team branded Chrysler Ypsilon and Delta and held various incentives for NFL fans at both the pre-game Tailgate party and the NFL Fan Rally in Trafalgar Square for Wembley Game between the Chicago Bears and the Tampa Bay Buccaneers on October 23.

“It’s a great opportunity for us to promote the Chrysler brand through our association with the NFL, and in doing so showcase our recently launched Ypsilon supermini and Delta hatchback models.

“Chrysler shares similar brand values to the NFL and with both brands looking to strengthen their position in the UK, it’s a relationship we look forward to developing as the NFL season progresses.”

The NFL is looking to expand in the UK and it has been rumoured that a team could be launched and based in London in the future.