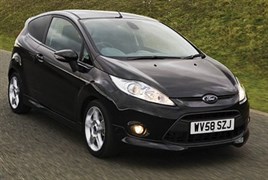 New car registrations saw a slight drop of 0.8% in the plate-change month of September with 332,476 units registered.

September is the second largest single month for new car registrations, just behind March’s 366,101 units and should represent almost 17% of the annual market.

Paul Everitt, Society of Motor Manufacturers and Traders chief executive, said: “The all-important September market outperformed expectations and is less than 1% below last year at 332,476 units.

The SMMT has revised down its 2012 registrations forecast to 1.96 million units; a reflection of the continued weakness in UK domestic demand and the uncertainty across European economies.

The fleet market remained strong in September, but private demand slipped further, down 9.3% representing 46.7% of the September total, down from 51.0% in 2010.

The Ford Fiesta (pictured) was the best selling model in both September and the year-to-date. Despite volumes slipping in 2011, supermini segment cars (such as the Fiesta) still account for the largest proportion of the September market, at 37.8%. Growth was focused in the lower medium, executive, luxury and dual purpose segments in the month.

Sue Robinson, director of the RMI National Franchised Dealers Association (NFDA), said: "Although it is positive to see a rise in fleet car sales volumes, there is still great cause for concern in the retail car market.

“Consumers are still experiencing rising household expenses and diminishing disposable income. Those that do have access to disposable income are still nervous about purchasing big ticket items. Instead they are putting off larger purchases until there are signs that the economy has began to recover. The Government needs to look at schemes that could improve consumer confidence and boost spending, a message that we gave to all political parties at the recent party conferences."