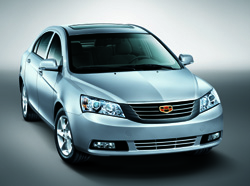 Chinese manufacturer Geely is looking to establish a network of up to 40 showrooms in the UK before the end of next year with ambitions of co-developing how the franchise is run with dealers.

Geely produces London black cabs for Manganese Bronze and the partnership has extended to a distribution deal to ship Chinese built models here to the UK. The first of which will be a C-segment saloon called the EC718 (pictured).

Matthew Cheyne, Geely Auto UK market development director, told AM: “We’re looking for businesses that want to do things differently and as we look at potential partners we’ll want them to help shape how the franchise will be run before we launch.”

Investment costs to start up the franchise will be low and Cheyne said Geely “won’t be looking to audit the colour of the tiles”.

He said: “We have very specific plans of what we’ll be offering in terms of training, aftersales and customer care, but the final picture isn’t completely coloured in, but I wouldn’t want it to be.

“We want innovative and pioneering partners that well help shape the franchise with us.”

For the full story on Geely's plans for the UK see the next print issue of AM on November 25.