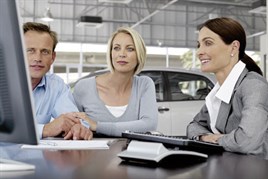 The failure of some dealers to sell finance and insurance products effectively creates frustration for suppliers. Especially when sales of new cars are deflated as the UK economy struggles to recover, banks wobble and there is a euro zone crisis.

There are though reasons for aftersales optimism. Service plans, once a sideline, have moved into the mainstream now tight household budgeting is a priority.

Families needing to run a car experience high fuel prices and a sharp rise in the cost of motor insurance, now subject to an Office of Fair Trading investigation.

So they keep their car rather than buying a new one – a chance for dealers to remind them that having a car serviced regularly is important for reliability, safety and fuel efficiency.

For dealers all these areas can be viewed as positives – potential levers to encourage car owners to invest in F&I.

Some owners though are seizing the chance to buy a new car and take advantage of financial incentives offered by manufacturers and specialist loan providers.

Monthly data from the Finance & Leasing Association traces a steady rise in the share of motor retail finance taken by showroom loans.

Supermarkets and direct lenders have been knocked back and, so far, there is no evidence of a reported fight back this autumn.

“However, we strongly believe that limited funds are available from direct lenders, so now is the time to be selling more point-of-sale finance,” he said.

“The economic situation presents an opportunity for dealers and puts them in a strong position where finance is concerned.

"Retail motor finance should be instrumental in a sale and not a peripheral part of the process.”

Stead sees a change of approach among a number of motor finance providers owned by large banking organisations, with many assessing whether car loans should remain a core function.

“Some have tightened their lending, reducing options available to dealers,” he said.

“But companies like Close Motor Finance still have an appetite to lend and the desire and capacity for further growth.

“For dealers proactive about using finance as a sales tool, the benefits are there for the taking. We are spending time working with dealers around training, covering not just F&I but the whole sales and marketing process.”

Stead believes dealers’ ability to offer fixed rate finance is a huge bonus, providing peace of mind because people know a fixed amount will leave their account every month.

“Customers will be hard pushed to find a similar type of funding outside showrooms,” he said.

“The time for pushing point-of-sale finance is now.”

But, in our experience, this reaction is a positive move, which tends to breathe life into the market and stimulate the industry.”

"The market place was providing consumers with a wide and competitive choice of finance options, from suppliers including captive finance pro-viders, banks and supermarkets.