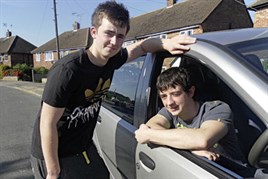 Telematics provider Cobra UK, a supplier of technology for the ‘smart box’, fears that unless something is done to reduce car insurance costs for the under 20s, the motor industry could continue to lose its young car buyer base over the next decade.

Andrew Smith, Cobra UK managing director, said: “Manufacturers and their dealers have to sit down with the insurance companies to see how they can speed up the process of moving to a driver behaviour-based insurance platform before we lose the new and used car buyers of the future.”

Its average premium for a 17–20-year-old is £2,440 (based on more than 300 sales), which has seen the company pay cashbacks of around £100 to 88% of its young, responsible-driving policyholders in August following a 90-day monitoring cycle.

By combining the funding of a new car with insurance and partnering manufacturers such as Vauxhall, which often has discount deals that can be off-set against insurance plus utilising ‘smart-box’ technology, Young Marmalade marketing director Nigel Lacy believes its product is not only helping youngsters access driving, but encouraging them into newer and thereby safer and cleaner vehicles.

The next step for Young Marmalade is to see the scheme operating at dealership level and the company is already in talks with some dealer groups whose franchises incorporate lower-engined vehicles in their range.

With dealers on board, the product can also be applied to vehicles up to three years old, widening the choice for young drivers.

While Lacy is somewhat of a crusader for the young driver, he also points out the commercial opportunity for dealers.

“Hopefully, dealers will keep those customers for many years to come,” he said. “Our objective is to get young drivers in safer cars, in an affordable way. We are saying to the four out of five who don’t crash – ‘We’ll give you a better deal, but the conditions are: drive a newer car and drive sensibly’.”

If dealers don’t embrace such schemes and if premiums remain high, the prediction from Tim Shallcross, head of technical policy for the Institute of Advanced Motorists, is that in a few years’ time a high proportion of people will not learn to drive until they are aged 25 plus, could well come to pass.

He said: “There’s a real possibility that we will see a substantial number of over 25s or even people aged 30-35 learning to drive for the first time because there is no point in doing so when they are younger.

“But learning to drive later in life has major implications such as employment choices and there’s the issue of learning something so fundamental later in life.”

Former racing driver John Cleland (left) is working with the Institute of Advanced Motorists in a bid to turn youngsters into better drivers.

Some insurance companies will offer a discount for IAM advanced driving test holders, but Cleland pointed out undergoing the course and test will ultimately make a better driver who is less likely to have an accident and therefore will eventually enjoy lower premiums.

The former British Touring Car Champion (having won the title twice in 1989 and 1995) has pledged to fund as many youngsters as possible who live within the locality of his Galashiels-based Volvo and Jaguar dealerships through the IAM course.

Cleland said: “The driving force of our campaign is to save lives. We don’t see these kids in our dealerships – they are not going to be in the market for a Volvo or a Jaguar – so the fact that they are being priced out of driving by high insurance premiums doesn’t affect our customer base, but maybe in 20 years time, they may think fondly of us as the people who helped them on the road to safer motoring.”