Used car analysis: Capitalising on 4x4s as the weather gets colder 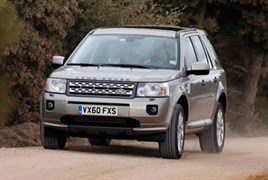 The more severe winters of the past couple of years have sometimes caused chaos for the car retail sector.

But while heavy snow has inevitably brought a price paid in lost sales as would-be buyers were forced to stay at home, there have also been opportunities.

These have been seized by the smart trader, as dealers look to service the need for appropriate transport during the winter months.

Research conducted during the summer was already suggesting that this year traders would start to speculatively purchase these vehicles much earlier than in previous years in order to try and get ahead of the game.

This is nothing new for the seasoned trader.

After all, they will do the same thing with convertibles during the winter months, in time for demand to resurface in the spring.

But what has changed this year is that traders were actively seeking 4x4s to stock as early as September.

This makes sense, in order to beat the stampede we saw last year when the weather really started to bite and prices were forced up.

The graph below shows the last two years’ trend and how the peaks and troughs represent a distinct buying pattern for this type of vehicle.

This does not represent a risk-free strategy, however.

Although last year saw prices rise sharply from December through to March, they also fell away just as quickly, once the perceived necessity for such a vehicle had disappeared.

The difference this year has been that buying started much earlier and brought greater increases than for a few years.

November movement was an increase of 1% when historically there has been a negative movement.

Furthermore, there does appear to be a small disparity between the performance of mainstream models and the prestige part of the sector.

The rise and fall in values is far more accentuated in the prestige part of the sector, reflected by the prestige 4x4s climbing much more sharply than the mainstream models.

Research also confirms that demand in some cases is not retail-led but about prospecting for future winter demand, following the widespread media reports of another harsh winter ahead.

In short, dealers are making sure they are not caught out this year without the right stock portfolio.