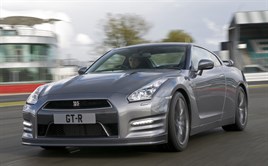 As well as more power, the 2012 GT-R has a newly developed asymmetric suspension which Nissan says compensates for greater weight on the driver’s side in RHD models, enhanced transmission ‘feel’ and a stronger body for extra rigidity and better handling.

Interior changes include blue lighting inside the tachometer ring to match the shift position indicator light, a rear view camera as standard on all models and new Bose sound system upgrades.
Nissan will also be creating a track focused version of the GT-R which will cater for customers who want a more track biased driving experience.

Further details on the track specific version and pricing for MY2012 GT-R is expected in early December.