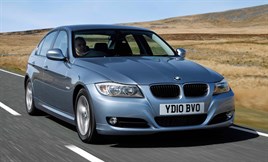 Commissioned by Fleet News, the annual analysis of the top 50 (by fleet size) leasing companies in the UK asked participants to rank the best vehicles and manufacturers for reliability, with scores compiled to create a top 10 for cars, and a top five for vans.

FN50 companies have a combined fleet of more than 1.2million vehicles, and the reliability survey is the UK’s largest.

The BMW 3 Series is the most reliable company car, according to the survey, retaining its number one position from 2010, while the Honda Accord retains its second place from 2010.

The Volkswagen Golf has leapt from to third place from 10th, while the Audi A3 takes fourth place after appearing outside the top 10 last year.

Two British-built cars take fifth and sixth places – the Burnaston-produced Toyota Avensis and the Sunderland-built Nissan Qashqai – while the Volkswagen Passat takes seventh place in the table, coming from outside the top 10 in 2010, with last year’s third place car, the Audi A4, in eighth place.

The final two places in the table are taken by two cars absent from the top 10 last year, with the Mazda6 taking ninth place and the BMW 5 Series securing 10th place.

BMW also takes the top spot as the most reliable car manufacturer, with Audi taking second place.
Honda falls from joint first place in 2011 to third place, with Volkswagen fourth and Toyota in fifth place. Nissan takes sixth place ahead of Mercedes-Benz in seventh, while Ford, Lexus and Skoda make up the remainder of the top 10.

The Mercedes-Benz Sprinter has knocked the Ford Transit off top spot in the FN50 van reliability index, while Volkswagen has leapt ahead of Ford in the manufacturers’ table.

But Ford still claimed a strong second place, with the Transit Connect and Transit taking second and fourth places in the model table.

Volkswagen took third and fifth places with the Caddy and Transporter, while the Volkswagen Crafter large panel van took sixth place in our table.

Mercedes-Benz was the third most reliable van manufacturer, while Fiat and Renault made up the top five.

Arguably van reliability is more important than that of company cars, because downtime with cars can be worked around by rescheduling meetings or relying on telephone or video conferencing.

Vans are usually on the road because there are performing some essential duty, such as delivery of goods or services, with another business relying on them.

“Van reliability is arguably more important than car reliability as vital supply chains can be disrupted through unnecessary vehicle downtime. Volkswagen has demonstrated with its leading position as a van manufacturer, and high placing for its models, that fleet operators can choose its vehicles in confidence.

“As the quality of vehicles continually improves, competition becomes increasingly tough to single out the best performers. The Mercedes-Benz Sprinter has always had a reputation for strength and durability and its top placing in the FN50 van reliability survey shows this impression is well deserved.”