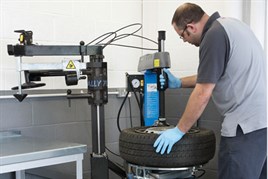 The UK motor industry is watching the new owner of Kwik-Fit closely to see whether it will combine its market-leading tyre chain with its existing nationwide wholesale operation.

Itochu Corporation said when it bought Kwik-Fit earlier this year that it would keep the retail business, which has 676 centres in the UK, separate from its Stapletons Tyre Services distribution operation.

Stapletons is one of the three largest tyre wholesalers with nine warehouses across the UK, and it has its own chain of 130 retail workshops nationwide.

However, now Itochu has been given clearance by competition authorities to run the businesses freely, the tyre industry is watching closely for signs of integration or co-operation between Kwik-Fit and Stapletons.

Such co-operation could make it extremely difficult for franchised dealers to compete for premium tyre sales, a profit stream of increasing interest as their traditional service offerings come under attack from their independent rivals.

He said more dealers have gotten serious about tyres, as they try to make their dealership the one-stop-shop for customers.

ut their profit margins have been squeezed, and more now consider mid-range tyre brands as well as premium ones in order to increase volume and raise profitability.

Naylor warned it could decide to go further to make it extremely hard for franchised dealers to compete, by offsetting its retail pricing through the Stapletons wholesale operation, which actually operates some franchised dealer tyre programmes.

“We’ve already seen Kwik-Fit marketing strong retail discounts such as 25% off a set of four tyres. That’s a massive cut and it brings the price ceiling down for everyone,” said Naylor.

Itochu has already confirmed its intention to give fleet customers access to the 130 Stapleton’s Tyre Services centres in the UK that it already owns.

This will effectively increase the size of Britain’s largest independent fast-fit business to more than 800 high street locations.

It is also strengthening the management team that is responsible for the network of centres.

The pressure on franchised dealers to fight for tyre sales has been growing as their traditional workshop revenue streams of warranty work and up to three-year-old car servicing have declined.

However, independent fast-fit and service chains have continued to grow in scale and to take a larger share of the overall service parc.

Halfords Autocentres, which recently recruited ex-Kwik-Fit divisional director Simon Benson to head its operations, is marketing 30% discounts on branded tyres and guarantees to be cheaper than its larger rival Kwik-Fit.

And former Kwik-Fit Fleet managing director Mike Wise is now heading an online tyre business, Fleet Tyres. It is focused on securing accounts with SMEs to supply tyres for cars, vans and trucks.