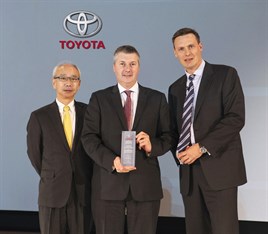 RRG Stockport came away with a double award, named as best for customer satisfaction and for the highest retail sales volume.

The awards were revealed at Toyota’s national conference at the NEC, Birmingham, on December 1.

He said: “We are delighted to be the first winners of this award; our success is down to the hard work and commitment of everyone at Yeomans in Eastbourne.

“We are committed to giving our customers the best possible quality and service and it is great to see our efforts rewarded in this way.”

Jon Williams, Toyota (GB) managing director, said: “Yeomans Eastbourne is a worthy first winner of the Centre of the Year award and everyone there is to be congratulated on delivering such a strong all-round performance.

“Our new awards help Toyota promote excellence in everything we do and encourage everyone to play their part in achieving the highest levels of business performance and customer satisfaction.”

The award winners are: