Porsche will launch a hybrid version of its Panamera S in June priced from £86,146. 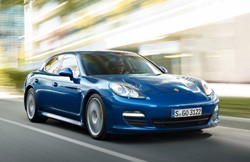 The Panamera S Hybrid combines a total power output of 380bhp with CO2 emissions of 159g/km, achieving a performance ratio of 2.39bhp per g/CO2.

Porsche is hoping the low emissions of 159 g/km CO2 might tempt company car buyers as it sits under the Company Write Down Allowance threshold of 160g/km. This means for a company purchase, the price can be offset against tax at the rate of 20% per annum.

The Panamera S Hybrid is driven by the same engine combination that’s in the Cayenne S Hybrid, a model which already accounts for a fifth of Cayenne sales in the UK.

The main propulsion is provided by a supercharged 3.0-litre V6 engine delivering 333bhp supported by a 47bhp electric motor. Both power units are capable of powering the Panamera S Hybrid either alone or in combination. The electric motor also operates as a generator and a starter.

The electric motor is connected to a nickel metal hydride (NiMh) battery where the electrical energy recovered while braking and driving is stored.

The Panamera S Hybrid also features adaptive air suspension as standard, plus a display panel that provides the driver with all the relevant information about the vehicle’s specific hybrid driving status.

With the introduction of the new hybrid, the Panamera range now comprises six different models with a choice of two- and four-wheel drive and four engines.