Seat will launch four new models next year in its biggest product offensive to date. 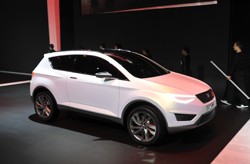 Seat president James Muir told said that with more than 50% of sales generated by the Ibiza, Seatis heavily reliant on one model and needs to change that to reverse its fortunes.

This will help address what Muir describes as inconsistency in the brand's products.

"Where do Leon and Altea sit in their segments? In the past we have sometimes invented segments but all our new products will be firmly anchored in established areas of the market."

Seat needs to make new Leon - one of the four new models for 2012 - as successful as Ibiza, he said. One way will be, like the Ibiza, the availability of a three-door, five-door and wagon, he explained.

He said the Exeo, launched in 2009, had been a solid success and a good start in a new segment and is now the third best-selling Seat in the UK behind Ibiza and Leon.

"Now we're in that segment with the Exeo, we're going to stay there," he said.

"I believe an SUV is something the brand needs and we need to get away from having concepts that are just flights of fancy because that gives us credibility issues."

The IBX concept taking centre stage at Geneva was not "a flight of fancy" he added.

Muir says that he has been addressing some of the pressing issues with a new management team and sorting out "sometimes inconsistent" sales network. Even the UK, "in better shape than most countries", has its challenges, he said.

He is tasking the UK team to reach a three per cent market share, taking sales from around 35,000 last year to approaching 60,000.

Under-utilisation of manufacturing in Barcelona is another key issue - the Martorell factory was at around two-thirds capacity in 2010; that will increase this year with the addition of Audi Q3 and other Seat models to the plant "and we will grow to 100% soon".

Another priority is to expand sales outside Europe. "Ninety per cent of our sales are in Europe and we have to be a global brand to make full use of Martorell," he said.