Harratts Renault Wakefield has been made an approved Renaultsport specialist dealer after selling the most models in the UK. 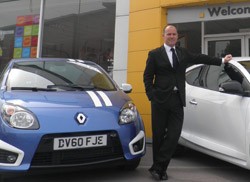 As a result of earning approved status as a Renaultsport specialist, Harratts has extended its territory to cover Barnsley, Huddersfield, Tadcaster and Dewsbury. The dealership complements Harratts’ other Renault outlet, which is based in Pontefract.

John Cairns, dealer principal of Harratts Renault Wakefield, said: “Following approval to become a Renaultsport dealership, we are pleased that customers in the region and beyond can now benefit from the skills and expertise offered by our specialists and with our new Renaultsport approved dealership, we’ll be able to capitalise on the growing demand for this high performance models.”