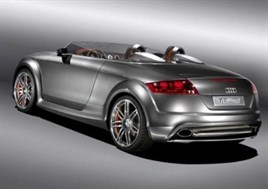 Instead of thinking about the miseries of a recession that shows no sign of ending for at least another year or two, let’s start by thinking about a happier time when sales of upmarket cars were booming.

The weird, disorientating, thing is that that time is now.

The first quarter of 2011 appears to have been a completely recession-free zone for most upmarket car manufacturers.

Indeed within the first few days of April, Land Rover put out a gleeful press release saying their UK sales were at the highest level in the entire history of the marque – and that is before they introduce the Evoque, which has “winner” written all over it.

Globally it is the same story for the Big Three premium marques – Audi, BMW and Mercedes are all roaring away in top gear. As dealers in prestige marques have noted, their models were first into recession and first out of it.

At the other end of the market, the three lowest segments (see table) all lost share – as they pretty well had to do if all the larger segments gained share.

Partly this was the effect of the scrappage incentive wearing off with falling sales of city cars and superminis, but there is something symbolic about the off-road sector overtaking the city car segment.

Lower medium segment also fell, but this probably has more to do with the run-out of the old Focus than any underlying shift away from these cars.

Above lower medium, there was some uncharacteristically good news from both the upper medium sector and compact executive.

In upper medium, this was mostly due to increasing sales of the new Vauxhall Insignia and VW Passat, while compact executive has benefitted from the rising tide of all premium models.

It has also helped that the market has shifted more towards fleet sales and away from retail sales: nowadays a BMW 3 Series is as quintessentially a fleet car as the Ford Sierra was in the 1980s.

Some may wonder how larger cars can prosper when fuel prices are so high, but larger no longer always means thirstier.

It is possible to buy compact executive cars that do over 60 mpg and off-road models that do over 50 mpg (on the official test cycles at least).

That is not so different from the average supermini.

The entry price to the premium club might sometimes be steep, but the annual subscriptions can be a pleasant surprise. 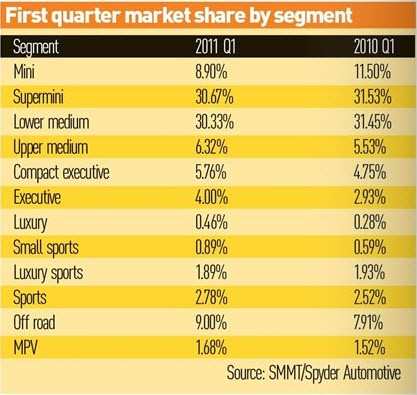