Average dealer performance figures for February 2011 were broadly in line with 2010 despite the lack of scrappage sales, with the average retailer losing £6,000.

February is a lacklustre month, returning poor results due to the reduced number of working days and the focus on March’s plate-change.

Mike Jones, ASE executive chairman said: “Only when we have the profitability performance for March will we gain an indication of how the year may look, however given the level of dealer registrations required by many to hit target at the end of the first quarter, we may not get a completely clear picture until these have washed through the system.

“We would normally be very concerned over the dealers’ ability to successfully retail these vehicles. However, they may well be helped in 2011 by a shortage of new vehicles as a result of plant closures following on from the Japanese tsunami.

“Indeed it could be the only time that self-registering vehicles has “turned out to be a good idea.”

One area, Jones said, needing focus is expenses as a percentage of gross profit.

Across each of the departments this ratio is running ahead of ASE’s benchmark (see table) and the sales department remains an area of concern.

“This is the single largest area where the top performers differentiate themselves, producing a ratio of 53.2% at the end of February and forecast to beat the benchmark for the quarter as a whole.”

Another trend to watch is the steady decline in overhead absorption, in February at 60%, compared to 61.8% last year and against a benchmark of 80%.

Dealers are making some progress in retaining used customers and extending new vehicle customers beyond their traditional three year life.

However, this is being offset by declining vehicle parcs and increasing overheads.

“Whilst March looks positive April looks like it will be tough with the additional bank holiday making the month look very similar to December. Profits will have to be made in the first three weeks, particularly if the sun shines.” 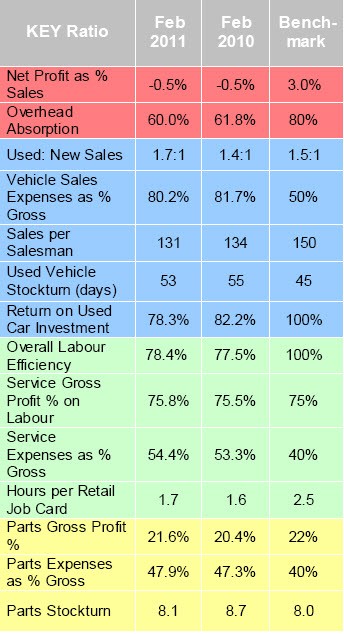