Renault has created its fastest ever road car, the Megane Renaultsport 265 Trophy, which will go on sale in later July priced from £27,820. 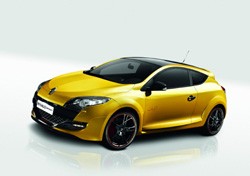 The Megane Renaultsport 265 Trophy will go up against models like the Volkswagen Golf R and Scirroco R. There are only 50 models allocated to the UK for sale.

In the UK, the latest addition comes based on the Cup chassis version, but also adds Recaro seats with yellow seatbelts and detailing, Renaultsport Monitor on-board performance tracking and a UK numbered plaque. There is a single option of a gloss Renault i.d. Diamond Black roof at £415.

Renault is offering free access for each 265 Trophy customer to one full 2012 Renaultsport UK track day which is worth £650.