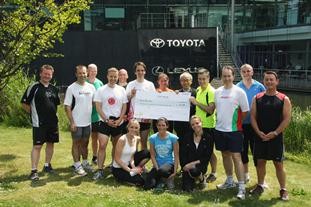 Paralympic gold medallist Noel Thatcher MBE and Tom Williams, marathon runner and presenter of Marathon Talk, joined a dozen staff at the company’s head office in Surrey for the sponsored run over Epsom Downs on 13 June.

The event, called Run for Japan, was organised by Toyota employees and raised £2,175 for the British Red Cross’s appeal.

The total was doubled through Toyota’s match funding initiative, the Fund for a Better Tomorrow, which provides grants to support community initiatives.

A cheque for the additional funding was presented by Naoya Taniguchi, chairman of Toyota (GB) to the British Red Cross.