Buyers not willing to pay premium for eco brands

There is now an inexorable growth in sub-100g/km models as regulatory and taxation pressure on CO2 emissions grows.

We are often asked what the implications of this are for the rest of the market. In short, it seems inevitable that this benchmark will have a significant impact on the desirability of higher polluting vehicles.

Furthermore, the definition of ‘higher’ or ‘lower’ polluting vehicles is now a moveable feast.

It will not be long before sub-100g/km will barely warrant acknowledgement as a significant benchmark.

The strides by manufacturers towards creating super-efficient cars while still giving the impression of a major benefit for the company car driver is ensuring this trend will continue.

But despite the trumpeting of ‘eco brand’ credentials by many manufacturers, does the typical car buyer care enough to pay a premium for them?

The short answer is, of course no. Any reduction in environmental impact from the average driver’s behaviour is incidental - perhaps considered as a bonus, but certainly not an end in itself.

What matters most to them is spending as little time as possible at the pump. This is why we have seen premiums for a typical 1.6-litre engine over a 1.4-litre reducing from around £1,000 to nothing, or even a lower value, than the smaller engine.

When it comes to ‘eco brand’ cars, the only relevance that CO2 has to the private customer is the benefit of reduced, or zero VED.

The fact is that cars in the lowest bands are also the most fuel efficient and it is this that makes them more desirable to the private driver.

Another way of looking at the same issue is by comparing the performance against CAP of different engine sizes.

The chart shows performance against CAP for disposals during May, for three major manufacturers, comparing engine sizes.

Performance against CAP tends to reveal the rate of depreciation over the course of a month and if large engines were generally depreciating faster than smaller, more economical ones, we would expect a substantial amount of disposals data, such as this, to reflect the trend.

But it does not, except in the case of Vauxhall where it would take further analysis to determine what other factors may have been at play to impact on the larger engine models.

This is not to say that large engines are not less popular in the current used market.

Clearly there are many examples of 1.6-litre engines, for example, which are now worth more than 2.0-litre engine models.

But the critical point is that the rate of depreciation is not radically different, despite the frequent anecdotal claims to the contrary.

Possibly the most interesting feature of this analysis is the fact that there remains a significant rump of buyers for whom high fuel consumption does not represent a barrier.

And common sense supports this. 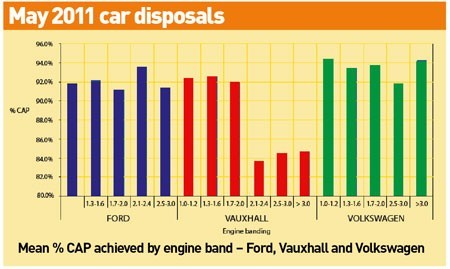