Is Skoda the new Volvo?

Back in the late 1980s, Volvo UK operated differently from the rest of the corporation.

The then UK boss had a clear vision of what Volvo was – and it had nothing to do with dynamism.

Volvo UK sold boatloads of 340 and 360 small cars (in fact the majority of its sales were in the UK) and he excluded any Volvo that might be associated with sportiness: the handsome 780 Coupé was not sold here and Britain would have nothing to do with Volvo saloon car racers.

The result was a great market share within a very tight demographic – the only shoes allowed to touch Volvo pedals were sensible ones.

In a globalised world, that option of going your own way in one country is no longer available, which means the 1980s Volvo UK strategy was a bit of a dead end, albeit a profitable one.

However, there is still a demographic of rational middle-class purchasers out there, so where do they go nowadays?

The answer, incredible as it would have seemed 30 years ago, is probably Skoda.

Despite having come from polar opposite starting points, the two companies now have a surprising amount in common.

Take estate cars, a pretty good measure of sensible buying habits. Volvo’s speciality was estate cars – indeed, large Volvos were traditionally styled as estate cars first and then converted into saloons, which is why the 740 estate was so much easier on the eye than the 740 saloon.

Overall, Skoda is behind only Vauxhall and VW in terms of overall estate car sales, with Volvo sixth.

Skoda now has an image every bit as focused as Volvo’s used to be.

Sensible, well-engineered VW cars sold at prices around 10% less than the equivalent VW is a pretty attractive offer.

Life for Volvo is more complex: the days when a semi-premium brand could knock out lower-medium hatchbacks for less money than the equivalent Ford have long gone.

Skoda proves the old adage that you should be able to sum up what you stand for in one sentence.

Everyone knows what BMW or Land Rover or, for that matter, Hyundai stands for.

Everyone knew what Volvo did stand for, but the new management in Sweden has to find a clear concise message for the company, now that all its competitors have long-since taken joint ownership of Volvo’s traditional messages of environmental awareness and safety. 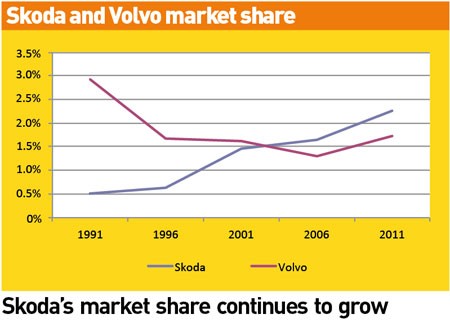