Electric bike to be added to Smart showrooms

Dealers representing city car brand Smart will add an electric bike into their showrooms next year. 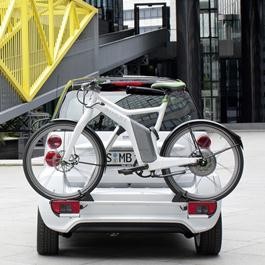 The Smart Ebike is going into series production, as the next product in the manufacturer's range of zero tailpipe emissions vehicles.

Smart, part of Daimler, has already trialled an electric ForTwo city car, which is due to go into production in 2012.

The Ebike is being developed and built in cooperation with Berlin-based electric bike maker Grace.

smart chief executive Dr. Annette Winkler said: "The Smart Ebike is a true smart – but on two wheels. It is an extremely well designed bicycle that is sure to draw admiring glances in the city – it's also really practical and easy to ride.

"Anyone can zip through town on it with or without exerting themselves – depending on their fitness level and as their mood takes them. And it's even easier to find a parking space than with the Smart ForTwo."

Winkler added: "We at Smart have been gathering experience of electric drives and the mobility needs of city dwellers around the world for years. The Smart Ebike is the logical product of this experience and compliments the smart fortwo extremely well.

"We listened to what people wanted from the perfect city bike and then came up with some clever solutions such as the integrated USB port for smartphones and energy recuperation during braking.”

The smart ebike is a really high-tech product and will arrive in the UK in 2012. Pricing is still to be confirmed.