Smaller, more economical cars are leading the field in terms of value retention, according to CAP, which also says used cars are depreciating less than a year ago.

The most notable example of improved performance is in the city car sector, where average depreciation between June and August was just 0.9% compared with 7.5% during the same period in 2010.

Superminis are also holding their value better than a year ago with average depreciation of 4.1% over the past quarter, compared with 8.3% a year ago.

It’s the same for lower medium (or small family) cars, which have depreciated on average by 3.5% when last year’s figure was 6.4%.

This is balancing the negative impact of tough economic conditions and fragile consumer confidence to prevent the kind of used car values ‘meltdown’ seen when the credit crunch struck in 2008.

CAP’s Mike Hind said: “The CAP used car price index confirms that demand is generally strongest at the smaller end of the market and this has resulted in slower depreciation this summer.

“With no economic recovery on the horizon it seems certain that smaller and more economical cars will continue to depreciate more slowly than ‘petrol guzzlers’ as running costs overtake image in the priority list for used car buyers.

“The other significant factor influencing used car prices in general is relatively low volume, which is partly a result of the collapse in new car registrations over the past 3 years.” 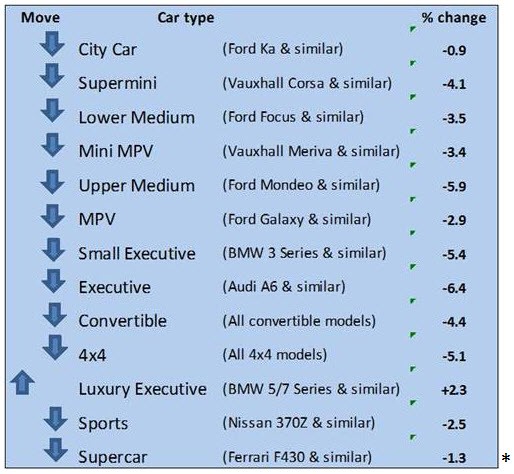