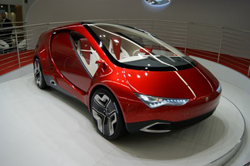 Russian-based Yo-Auto has been launched as a new eco-friendly brand at the Frankfurt Motor Show.

The company is a joint venture between truck maker Yarovit and Onexim investment group, owned by billionaire Mikhail Prokhorov who also owns the American basketball team, the New Jersey Nets.

Work started last month on a new plant near St Petersburg and Prokhorov has said he wants to make a unique eco-friendly hybrid car which would cost less than $10,000 (£6,200). The plant will have an initial annual capacity of 45,000 and this will double in its second phase, according to CEO Andrei Biryukov speaking to local media when work started on the factory which is scheduled to come on stream in the second half of 2012.

The concept unveiled today at Frankfurt uses a range extender petrol engine but the company says that its first models will have conventional petrol engines.

"We'll have to purchase car parts which are not produced in Russia, including a complex element base of the control panel, electronics, and some elements of the suspension system. Our main goal is not to worsen the quality," Biryukov said.

Prokhorov is the world's 39th richest man, according to Forbes, with a fortune estimated at $13.4bn. After graduating from the Moscow Finance Institute he made his name in the financial sector and went on to become one of Russia's leading industrialists in the precious metals sector. While he was running Norilsk Nickel, the company became the world's largest producer of nickel and palladium.

Last December, Prokhorov presented three prototypes of a hybrid car, including a hatchback, a van and a crossover costing between $12,000 and $15,000.