Seat expands scheme to get brand awareness with young drivers 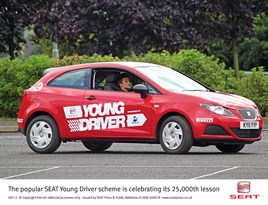 Seat is expanding a scheme which is successful in getting its brand and cars in front of young motorists.

Created two years ago as a fun and instructive way for motorists of the future to have their first experience behind the wheel, the SEAT Young Driver training programme has gone from strength to strength and has just run its 25,000th lesson.

It gives 11- to 17-year-olds a first taste of real-world driving in a safe and secure environment.

And soon even more young people will be able to take the controls of a stylish SEAT Ibiza alongside qualified, Government-approved, driving instructors for their first, formative, driving lesson as the scheme rolls out to even more locations nationwide.

Spokeswoman Kim Stanton said: ‘SEAT Young Driver has been an enormous success, and the young people who have had a lesson experience just love it.

‘Considering we launched in the middle of a recession, the fact that we’ve clocked up 25,000 lessons is a real endorsement for the scheme and I’m sure the addition of more regular venues will ensure even more young people benefit.’

Sponsored by Admiral, the Seat Young Driver scheme was devised to provide a fun platform to develop the driving skills of youngsters before they are old enough to drive on public roads and to instil a positive road safety message.

Compelling figures from a similar scheme in Sweden have shown a 40% reduction in accident rates among participants.

Those taking part drive one of the scheme’s fleet of Seat Ibizas, all of which are fitted with dual controls, alongside a fully qualified Approved Driving Instructor, and negotiate a route designed to replicate a real road and teach valuable skills such as car control and hazard awareness.

Lessons, which are fun as well as instructive, are available at weekends and during school holidays.

They last either 30 or 60 minutes and usually cost £29.99 or £57.99 respectively. However, discounts are available to those booking a lesson during October half-term.