Car buyers are proving unresponsive to the financial incentives provided by manufacturers and the Government to buy electric vehicles.

And across Europe incentive schemes vary widely and show a lack of correlation to EV sales.

Jato Dynamics has found that:

* Total EV registrations in Europe were only 5,222 in the first half of 2011, only 0.07% of market share
* Britain recorded 599 registrations in the first half of 2011, the fourth highest in Europe (up from 29 the same time last year)
* British drivers appear to be more receptive to EVs compared to other countries that offer similar subsidies. For example Spain (€6,500) and Britain (€6,400) have almost identical subsidies, but GB registered almost five times the volume in EVs (599 versus 122) in the period

Gareth Hession, VP for research at Jato, said: “The discrepancies highlight the apparently low influence of price on purchase decisions across the region.

"Given this it’s reasonable to conclude that sales are more affected by other factors such as the degree of urban geography, market maturity and charging infrastructure than was previously
thought.”

These local factors include the ability to use bus lanes and free city-centre parking in Oslo and exemption from London’s congestion charge all of which appear to exert a greater influence than point of purchase incentives.

The research also confirms a 10-fold increase in EV registrations across the region over the same period in the first half of 2010 – 5,222 compared to 507.

While Denmark appears to be a haven for EVs in Europe with tax exclusions that can potentially amount to €20,588 per vehicle, there were only 283 registrations in the first half of 2010. (or 0.32% of all vehicles registered in the country).

Sweden registers an almost identical volume as Spain (111), but subsidises each vehicle by only €470.

EV sales and subsidies by market 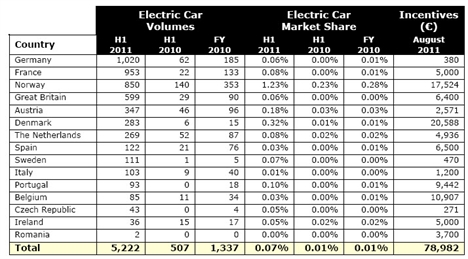