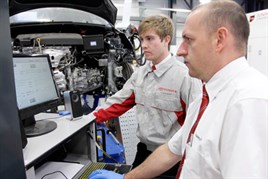 With buyers understandably avoiding the big-ticket pur-chase of a new car, franchised dealer profitability is under threat.

The continuing disappearance of older vehicle SMR work to independent garages, autocentres and fast-fits – and growing evidence of a similar trend in the fleet sector – means many are being forced to look at their parts business with fresh eyes in the quest for untapped revenue streams.
Some have seen it all before.

“Every time there’s a blip in car sales the manufacturers and retailers come back to parts and servicing, and decide it’s something they should be paying more attention to,” said Brian Spratt, chief executive of the Independent Automotive Aftermarket Federation (IAAF).

That doesn’t hide the facts.

The 2011 Datamonitor Survey reported franchised outlets have lost 15% of their parts revenue in the past five years, including 7% in the last year. It means there’s a need for more creative thinking on spares retailing.

One solution is to offer more stock that will appeal to a wider customer base.

In May 2010 Volkswagen Group launched a second range of components aimed at owners of five-year-old and earlier models. It has been quietly expanding Economy Parts ever since.

“The next stage is to widen the existing range so that more vehicles are covered, and to release parts for cars as they reach five years old,” said Mike Partridge, VW Group’s aftersales product manager.

“We will extend it to include new ranges for parts such as starter motors, particulate filters and catalytic converters.”

As well as the extra revenue for dealers, bringing drivers on-site boosts the chances of a car sale. It can also be a useful element in a local advertising strategy and has CSI implications.

But it’s not just car owners who are buying Economy Parts. Dealers are happy to sell them to local independent garages, too.

Again it keeps the tills ringing, but means VW Group can exercise some control over what’s fitted to cars maintained outside the network.

Independent garages are often happy to buy from franchised rivals. Repair business AJ Palmer is based on an industrial estate near Bury St Edmunds, Suffolk.

Owner Tony Palmer explained: “For run-of-the-mill stuff I use a factor – it’s Andrew Page mostly – but if the car is in warranty then I get parts delivered to me straight from the local main dealer.

"I will generally get a 5-10% discount on the retail price, but I then fit it and sell it to my customer at the RRP, which covers my time sourcing it.”

Another example of creative thinking is dealers getting involved in specific trade-only parts operations. Lookers’ ownership of FPS Distribution, which ships parts from 20 depots to 2,500 independent garages, is one.

Volkswagen launched its Trade Parts Specialists (TPS) business in 2006 and now has 61 centres across the country. All are owned by VW UK, but some are run by dealers.

An alternative is to sell parts for brands other than your own.

Renault set up its Motrio scheme in 2004 and from the beginning its franchised dealers offered a wide range of parts that weren’t for its vehicles.

While only a tiny proportion of business is retail sales, there is good take-up from independents.

Motrio sales have grown on average more than 6% annually since launch, and this year are up 9% against 2010.

Around a fifth of Motrio parts sold are ordered online then collected from a dealership.

He added: “Less than 10% of the vehicle brands in the UK market do it.

"However, trade operations for OE parts among dealers will be relied on increasingly to make up for falling own-make SMR revenues.”