Jaguar looks to take on 911 with new sports coupe 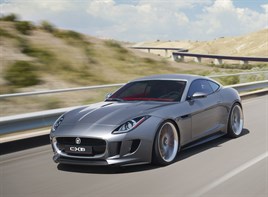 Jaguar will be looking to compete against Porsche with its new C-X16 coupe which looks set to be given the production green light for 2013.

The model was first revealed at the Frankfurt Motor Show last year and while there’s still no official confirmation that it will be built, Jaguar is expected to be looking to compete for base model 911 customers with its new sports coupe.

An insider at Jaguar said the company would be “attacking the market we don’t with the XK”.

Jaguar has presented the C-X16 and its C-X75 supercar at the Delhi Motor Show, the latter model has already been confirmed for production.

Adrian Hallmark, Jaguar global brand director, said: "In May of 2011, following an incredibly positive reaction to its launch, we announced that the C-X75 concept would be developed into production form, and that process is well-advanced.

"The C-X75 is destined to be one of the world's most desirable, exclusive, efficient and advanced supercars.

"Reaction to the C-X16 coupe has been equally positive following its debut in Frankfurt during September of last year, and as a vivid evocation of Jaguar's future sports car design language, it points to very exciting times ahead."