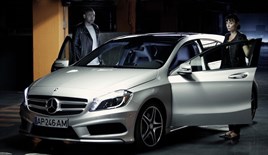 Mercedes-Benz will launch its new A-Class marketing campaign on October 6 with a run of three adverts during the commercial breaks in the X Factor.

The campaign will use Twitter and with the hashtag #YOUDRIVE, which will group together all correspondance about the A-Class on the social networking website, viewers will be able to vote for how the advert plays out over the three part story.

The story takes the form of a light hearted cat and mouse caper, during which the hero, a young music star played by actor Kane Robinson, is trying to get to a secret gig, with the help of his female accomplice, actress Wendy Glenn. Meanwhile the authorities are keen to close it down.

Consumers can then visit an interactive channel on YouTube, www.youtube.com/youdrive, to view all available films and create their own A-Class story.

There will also be a chance to win a new A-Class for a year, for those who find the date of the secret gig in the film.
David George, marketing director, Mercedes-Benz UK, said: “The A-Class represents a new, younger, more dynamic Mercedes-Benz brand, which is reflected in this campaign.

“It's a modern Mercedes-Benz, that encourages people to do what we know they enjoy; to get involved. In doing so, we hope to really cut through and create a positive, lasting impression on their view of the brand.”

The A-Class is on-sale now, with prices starting from £18,945 and hope to raise Mercedes’ image to help it compete with BMW and Audi.