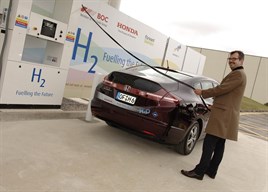 Honda has signed a memorandum of understanding (MOU) with organisations from the Nordic Countries, to support the market introduction of fuel cell electric vehicles (FCEVs) and a hydrogen refuelling infrastructure between 2014 and 2017.

This collaboration follows last month’s announcement by Honda’s CEO, Takanobu Ito, of the company’s development of a new fuel cell electric vehicle for Japan, the U.S. and Europe, to be launched from 2015.

It also comes off the back of a month-long and high profile Europe Hydrogen Vehicle Road Tour, organised by H2 Moves Scandanavia, which moved across the UK just last week with an event at the UK’s first public-access hydrogen refuelling station based at Honda of the UK Manufacturing in Swindon.

He said: "Businesses and individuals will not buy hydrogen vehicles unless they know there are enough places to fill up. Refuelling stations, like the one in Swindon, are vital if we are to switch over to a low-carbon transport system. The development of fuel-cell vehicles by the major manufacturers must be matched by investment in the infrastructure needed to service them.”