Despite the loss, it is an improvement of £4,000 in the performance for the comparative month in 2011. This leaves the average site £25,000 ahead of the prior year for the current year to date.

August is always a difficult month to make a profit due to customers holding off their purchase until the September plate-change.

As with previous months in 2012 the improvement over the prior year is purely down to the vehicle sales department. In very basic terms dealers are increasing volume and gross profit without having increased their cost base.

Mike Jones, ASE chairman, said: “The vast majority of this improvement has been in new car volume per site. There has also been a marked increase in average used vehicle gross margins, which are up 9% on the prior year.

“While the majority of dealers are struggling to source used cars, once they do find the stock it is selling very profitably. Indeed the national average position on used car return on investment has jumped forwards close to our key benchmark of 100%.

“We would expect this to fall back in September as a result of increased stock from part exchanges and self-registered vehicles. Indeed the successful disposal of these self-registrations, along with the genuine retail result for September, will hold the key to the profitability for the full year.”

Aftersales profitability remains tough at 58.8% in August, with the average dealer just about maintaining performance in line with the prior year. The issue from an overhead absorption point of view is that costs are continuing to rise steeply meaning the average dealer is likely to end the year at around 55% total absorption. 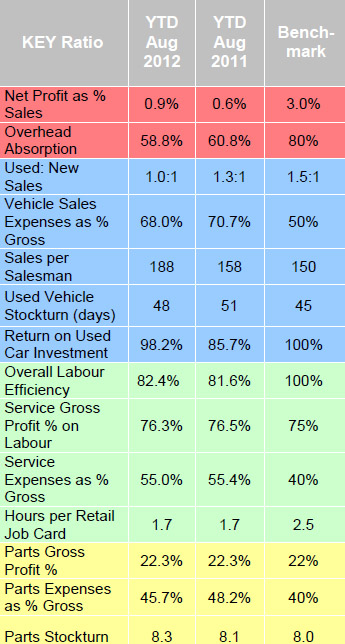