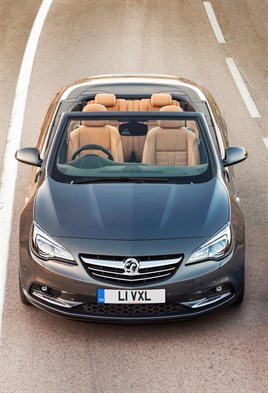 Vauxhall has released details of the Cascada convertible range which will be launched next March.

Cascada will be offered with a choice of engines from launch, including a totally new 1.6-litre turbo petrol engine producing 168bhp, plus an entry 138bhp 1.4-litre turbo and 163bhp 2.0-litre diesel. Other more powerful versions of both powertrains will be added after the launch.

"The full-size convertible sector tends only to be occupied by very high-priced cars from premium manufacturers. With Cascada, we’re offering customers high levels of equipment, technology and luxury but at an affordable price."

The Cascada’s fabric roof can be specified in one of three colours, which can be coordinated with one of ten body colours.

As well as seating four adults, it has a boot with a minimum load volume of 280 litres with the roof down, and up to 350 litres roof up, while the rear seats have Vauxhall’s FlexFold system, which electrically releases and folds down the 50:50 split rear seats to allow longer objects to be carried.

Also available across the Cascada range is FlexRide, Vauxhall’s adaptive chassis control system, and a range of wheels, from 18- to 20-inch in diameter.

Cascada pricing will be announced in line with order banks opening at the start of next year. First UK deliveries will be from March 2013.

As with all Vauxhalls, first Cascada owners will benefit from Lifetime Warranty, lasting the life of the car or up to 100,000 miles, whichever comes first.