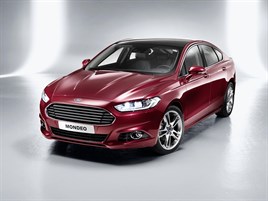 Ford has confirmed its Transit assembly plant at Southampton and stamping facility at Dagenham will close next year.

It follows yesterday's announcement that its Genk, Belgium, production site will close in 2014. The plans will also see the important Mondeo model launch put back to 2014.

It expects around 1,100 job cuts in the UK, through voluntary redundancies. Employees who wish to be redeployed will be where possible, Ford said.

In a conference call, Ford of Europe's CEO Stephen Odell said a significant de-stocking action will take place in Q4 to address inventory issues, and the focus thereafter will be on growing profitable retail and true fleet business and cutting costly rental, pre-registration and demonstrator supplies.

Ford's European operation expects to be back in the black around mid-decade.

It predicts the automobile market in Europe to remain flat next year at best, at 14m units.

"Using the same One Ford plan that led to strong profitability in North America, we will address the crisis in Europe with a laser focus on new products, a stronger brand and increased cost efficiency,” said Alan Mulally, Ford president and CEO.

"We recognise the impact our actions will have on many employees and their families in Europe, and we will work together with all stakeholders during this necessary transformation of our business."

One of Ford's objectives is to srengthen dealer network profitability and the customer retail experience, and strategically reduce dealer stock levels for the benefit of Ford, its dealers and customers.

That could address the levels of pre-registrations and discounts which have damaged the Ford network.

“The European market holds potential for profitable growth if we accelerate product development and move decisively to address our costs and overcapacity,” said Stephen Odell, chairman and CEO, Ford of Europe.

“Even in today’s environment, we are increasing the introduction of new products, leveraging our One Ford global strengths.”

Paul Everitt, SMMT chief executive, said: “This is difficult and disappointing news for all the people and families affected by today’s announcement, but it is part of wider restructuring to ensure a stronger and more competitive European automotive industry.

"The immediate priority is to help those impacted secure alternative employment. The decline in European vehicle markets and the uncertain future growth prospects has resulted in a number of vehicle manufacturers restructuring their operations. These are difficult times for the European automotive industry as manufacturers adapt to new market conditions and changing patterns of global demand.

“Ford has renewed its commitment to the company’s core R&D, design and engine manufacturing operations in the UK and these will continue to provide long-term and high value employment to many thousands of people.