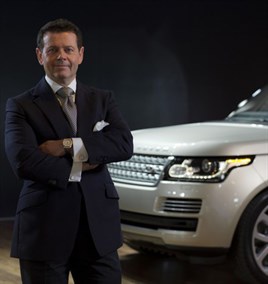 While car sales across Europe are suffering Land Rover has been able to report a 46% hike in global sales this year.

The new Range Rover Evoque has been a big contributor to the success with more than 100,000 sales in a year pushing Land Rover to record numbers.

Design chief Gerry McGovern said: "With Evoque we went into a segment that no one had even thought of and it became the fastest selling Land Rover model ever."

Speaking at the launch of the fourth generation Range Rover, McGovern said there were more opportunities in the future.

"We have three distinct families, Defender, Range Rover and Discovery and there is room to stretch these further - at the moment there is only one Discovery, we are looking at what we can do there."

He added that the next generation Defender will not look like recent concepts. "I don't think that will come as a surprise but the challenge has been to design and engineer a new, modern Defender that is still as hard as nails."

Interestingly McGovern did not mention where the Freelander fits in with Land Rover's future product plans. The next Defender, which could be based on the Evoque platform, had been expected to slot beneath the Freelander in the range.